Herbie Husker: the history of a Nebraska icon.

As our beloved Herbie nears 50, we take a look back at a mascot legend.

Herbie Husker, A legend is born

The year was 1977 and Tom Osborne was beginning his first season as head coach of the Nebraska Cornhuskers. Nebraska was looking for a cover for their 1977 media guide. Husker sports information director Don Bryant reached out to Dirk West, a Texas cartoonist who in 1971 had created the Texas Tech “Red Raider”, about drawing a cartoon that would symbolize the hardworking values of Nebraskans. The drawing was done and the when the ink dried, the first version of Herbie Husker came to life.

There have been many iterations of Herbie but the original Herbie wore denim overalls, a large cowboy hat with an ‘N’ on it and an ear of corn in his pocket.

Herbie’s biggest makeover came right before the 2003 football season. Steve Pederson was a first year athletic director at Nebraska and it was decided that Herbie’s appearance needed to be updated to better reflect Nebraskans in the twenty-first century. Herbie’s overalls and shoes were swapped out for a red cowboy hat, blue shirt, denim jeans and work boots.

Herbie has now worked in his role for 47 years, bringing a positive attitude, and is self-motivated and team-oriented. Herbie never complains, but just gets on with the job. Herbie personifies Nebraska’s hardworking dedicated spirit. His amazing career was founded on humble roots and was preceded by other mascots, Corncob Man, Huskie the Husker, and Harry Husker. Herbie is the longest running mascot in Nebraska history.

Herbie Husker, a cast of characters 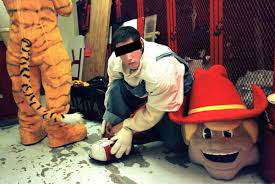 Since 1977 many students have suited up as Herbie, and are urged to keep their identity a secret through graduation day, preserving the magic for all the Husker fans. The role of Herbie is not a paid position, students, instead, receive a small academic scholarship and are part of the spirit squad. If you want to try out for the Herbie role you can, regardless of your year at school. If you do try out you have to be willing to commit to one year as Herbie. The role entails practicing with the cheer squad for about 6 hours a week and also attending Husker games, events, and other special events. Sometimes Herbie gets invited to special occasions, and has attended weddings, once walking a bride down the aisle!

Text them to your friends, share them on social media or add them to your blog and message-board posts!
Go Now

Can't make it to a TV for the game? Stream the Husker broadcast from any of these stations.
Click Here

Historically, Herbie is dressed in denim overalls, a red cowboy hat emblazoned with a large N, and an ear of corn in his pocket. Before the 2003 college football season, Herbie's appearance was altered to include a red workshirt, blue jeans, and workboots. This was done to update the overall appearance of the state's agricultural workers and general public, but the new design has not been well-received.[2] During halftime of the 2006 Capital One Bowl, Herbie was named National Mascot of the year for 2005. In January 2005, Herbie starred in his own children's book, Hello, Herbie Husker!, published by Mascot Books.
Click Here